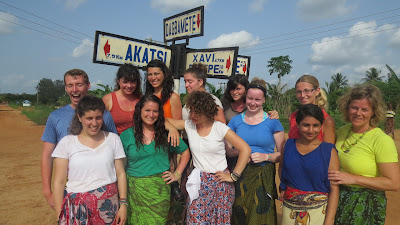 -Kathy
Posted by Ghana Travelers at 02:18 No comments: 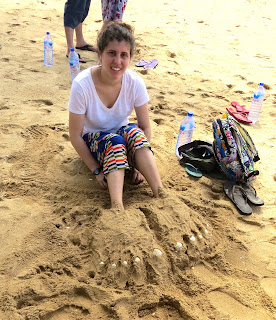 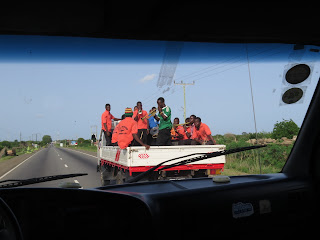 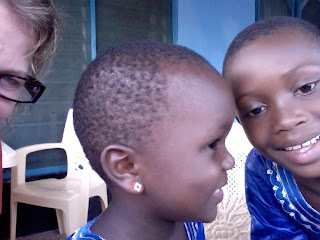 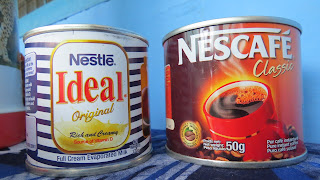 Posted by Ghana Travelers at 19:03 No comments:

I’m not going to write about the slave castle, there aren’t really words to describe the abundance of emotions it made present for me, but after our tour of the castle I really found myself evaluating the amount of freedom I have.  Freedom to live where I choose, freedom to surround myself with what and who I choose, freedom to travel where I choose. I found a new layer of appreciation, on top of the layers that have already formed over our few short weeks here in Ghana. I really reflected on what I have seen, learned and been a part of since arriving. The privilege I have had. This trip has taught me so much about respect, cultural differences, communication, and really indulging in the things, events and people that make you happy. There’s no rush, so why hurry? There’s always time to stop and talk, have a drink, listen to someone’s story, listen to the music.  Life is what you make it, from the materials you have in front of you, so why ask for more? Rather make more from what you have.

I am very thankful for the newness I have been exposed to, I am happy for myself that this was a trip and investment that I found a priority and have worked hard to get. After two weeks I feel so much more whole, and I know in my heart that the privileges I have had will follow through beyond my time spent here, and overflow into my future, wherever it takes me.

I am very thankful for the newness I have been exposed to, I am happy for myself that this was a trip and investment that I found a priority and have worked hard to get. After two weeks I feel so much more whole, and I know in my heart that the privileges I have had will follow through beyond my time spent here, and overflow into my future, wherever it takes me.

I am looking forward to our remaining week here in Dagbamete and continuing to learn, perform and explore.

-Rebecca
Posted by Ghana Travelers at 12:54 No comments:

Just as we were settling into our morning drumming classes and afternoon naps in Dagbamete, our trip twisted its course with a densely active three-day, two-night trip to the famous Cape Coast of Ghana. With Master Dan as our pilot and Robert as co-pilot, we packed up the ‘fridge’ (our white van that has SOME airconditioning) and sped off-because “overspeeding” is not an option here. Driving through Greater Accra, we never went hungry with an array of snacks available at our window every time we came to a stop in a busy hub. Ladies perfectly balancing octopus, shrimp, plantain crisps (a staple in our diet), pineapples and other treats would quickly supply our entire van within minutes. 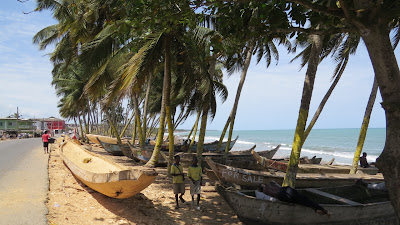 Once in the Central Region, primarily populated by the Fanti, we drove along the ocean and palm trees, through the bustling Cape Coast township and finally arrived to our Botel. The Hans Cottage Botel, an eco hotel built over water, allowed us to share our meals alongside crocodiles and different birds while listening to the ‘reggae-fied’ tunes that consistently played at the Botel restaurant. 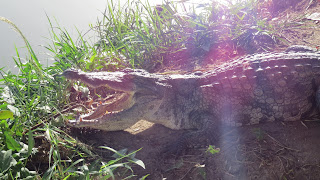 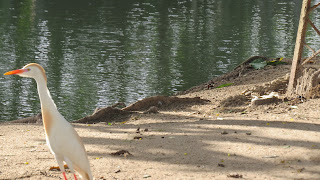 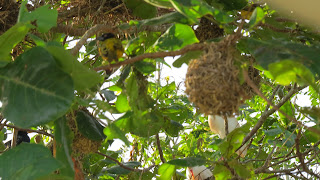 And have a swim! 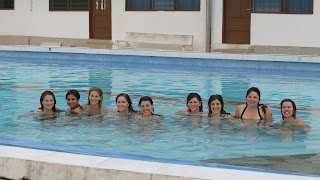 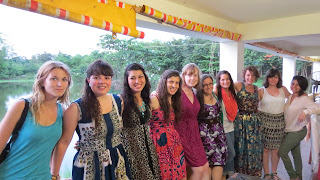 Our first dinner would have been an all girls night out as our poor hubby did not have the most comfortable road trip and Godsway had gone in to town. However, Dennis did decide to show up to dinner half way and graced our meal by saying, “It came out of me like shaken up pop can and then I was fine!” With his detailed description of his digestive system we ended dinner early.

Then came along a very long Friday, a day of rest for fishermen, but not for us! 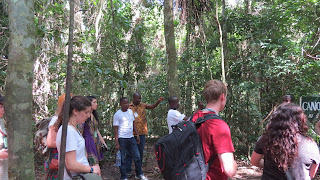 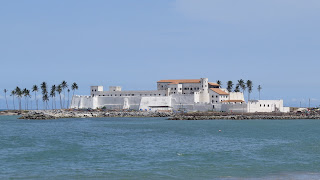 Beginning with the canopy walk in Kakum Rainforest (see next post for more pics & stories) in the morning and then the monumental Elmina Slave Castle in the afternoon and not to mention the long traffic and pothole filled drives back and forth (entertained by the gospel radio) it was quite the day! We were blessed with the breathtaking rainforest, drives that were definitely more entertaining than TV and the historical and emotionally challenging tour of the slave castle. It seemed as though everyone was equally drained as they were ready for more and so our busy day did not end here. 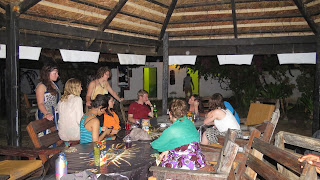 We then drove to the beachside Oasis Restaurant for dinner accompanied by lovely rhythms of live music from further up the coast of West Africa (featuring a kora, berimbau, gourd drum and djembes) and the cooling coastal winds. 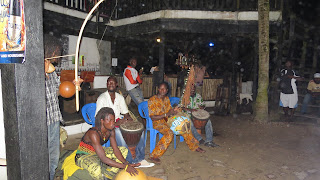 And here we are now-midday Saturday and not illegally overspeeding back to Dagbamete, not sweating profusely enough in an enclosed space and not loving every millisecond of this beautiful and crazy experience!
-MJ
Posted by Ghana Travelers at 08:01 No comments: